Nicknamed "6B”, the Royal Hotel's sixth floor rooftop beehive arrived at the hotel in August 2013 and has become an instant success. Over the course of early 2013 a local bee farm, Nature's Little Helper's, has specially bred 10,000 honeybees and provided the hotel staff with equipment and training to look after the hive. In September 2015, in light of the success of the first, a second hive was added to the roof.

The honeybees will travel up to 3 miles in search of pollen which will take them to the local suburbs of Cardiff, Bute Park and Leckwith Woods. Within a few months each colonies population would have reached over 20,000 bees. The hotel has started harvesting honey from the hive which is available for guests to purchase. The beeswax is used to make candles, balms and soaps.

Since the beehive arrived at the Royal, the project has been promoted in the local media including in the South Wales Echo, BBC Radio Wales and even featured as the location for ITV Wales’ evening weather forecast in August. We are currently working with IBRA, the International Bee Research Association, which is based in Pontypridd, just 10 miles out of Cardiff. Together we hope to raise awareness of the threats to the bee population and pass on their importance to crops to schoolchildren in the local area.

If you wish to view the hive during a future stay, please speak to Reception when you arrive and if the “Royal” Beekeepers are available they will be only too happy to show you the beehive (staff and weather permitting) – just don’t forget your camera. 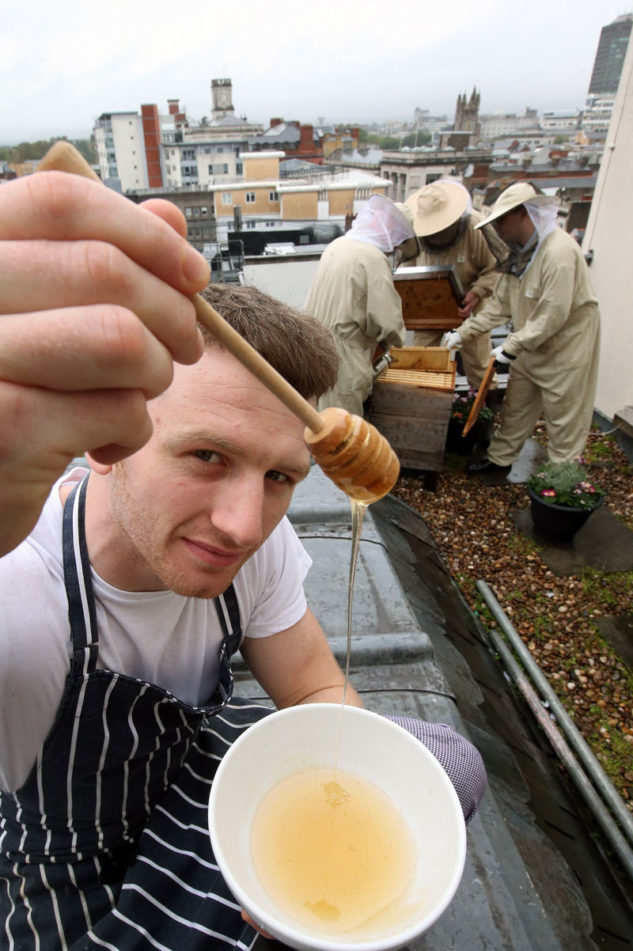